Value One – The Mount Vernon Police Department believes it must preserve and advance the principles of democracy. All societies have some system for maintaining order. Police officers in this country, however, must not only know how to maintain order, they must do so in a manner consistent with our democratic form of government. Therefore, it is the duty of the officers of this Department to enforce the law and deliver a variety of other services in a manner that not only preserves, but also extends our American values. It is in this context that the officers of this Department become the personification of a democratic form of government. We must not only respect, but also protect the rights guaranteed to each citizen by the Constitution. To the extent each officer considers his or her responsibility to include protection of the constitutionally guaranteed rights of the individual, the police become the most important employee in the overall structure of government.

Value Two – The Mount Vernon Police Department places its highest value on the preservation of human life. Above all, the Police Department must believe that human life is our most precious resource. Therefore, the Department, in all aspects of its operation, will place its highest priority on the protection of life. This belief must be shown in at least two ways. First, the allocation of resources and the response to demands for service must give top priority to those situations that threaten life. Second, even though society authorizes the police to use deadly force, the use of such force must not only be justified under the law, but must also be consistent with a philosophy of rational and compassionate social control. 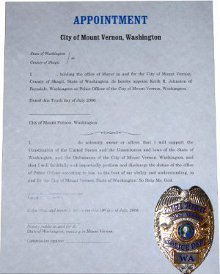 Value Five – The Mount Vernon Police Department believes it must be accountable to the community it serves. The Police Department is not an entity unto itself. It is a part of government, and exists only for the purpose of serving the public to which it must be accountable. An important element of accountability is openness. Secrecy in police work is not only undesirable, but unwarranted. Accountability also means being responsive to the problems and needs of our citizens. Accountability means managing our police resources in the most cost-effective manner. It must be remembered that the power to police comes from the consent of those being policed.

Value Seven – The Mount Vernon Police Department believes in maintaining the highest standards of integrity. Society invests in its police the highest level of trust. The police, in turn, enter into a contractual arrangement with society to uphold that trust. Our Department must always remember this contract and never violate that trust. Each member of the Police Department must recognize he/she is held to a higher standard than the private citizen. We must recognize that, in addition to representing the Department, we represent government and the law enforcement profession. We are the living being of the law.

Value Eight – The Mount Vernon Police Department believes it must stay attuned to a community in a state of perpetual cultural change. Of all the traits needed to be successful in policing, the single-most important one is the need for social intelligence – the ability to enjoy and to interact effectively with people of all ethnic, racial, economic and religious backgrounds. We must not let the traditions of our profession isolate us from the people whose help we need most to build a safer community. We want to guard against having our actions and words misinterpreted by people of different cultures or means. Judging people by the group validates suspicions that police do not serve all citizens fairly, equally and without prejudice.